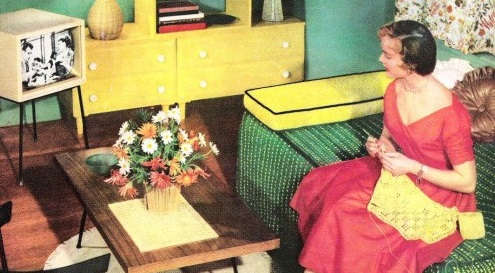 For those who feel a little alone at times being a TRW (Traditional Women’s Rights Activists) like me, basically having most of society against you, well I have a gem for you.

His name is Gavin McInnes.

Gavin McInnes is a host for the Youtube/journalism group called The Rebel Media and he openly speaks against feminism, the dangers of refugees and illegal immigration- this guy owns it. But wait, there’s more!

Gavin McInnes is a man who openly supports housewives, and knows that most women are happier at home.

“…that is because they’ve been brainwashed by Notorious RBG to think the kitchen is a jail cell. It’s not. An apron is a badge of honor.

You use it to create sustenance for the people you love.”

You read that right, and he isn’t even afraid of the media hating on him for being vocal about that either. He knows his statistics (stats like this one, probably) and despite being a straight white male that can be easily targeted by the left, he keeps going and stands up for us anyway. Strangely enough, Gavin was one of the co-founders of the liberal black hole that is Vice Media…such a crazy switch, right? He has hosted amazing Conservative-themed shows such as The Gavin McInnes Show and now he currently has his own segment, How’s It Goin, Eh? on Rebel Media, in addition to some extra videos he has on Rebel Media’s Youtube Channel. Check him out there sometime, he has some funny segments, rants and even storytelling from his own life experiences as a Conservative.

Though Gavin looks like the traditional hipster with his peculiar moustache, several tattoos and slicked-back hair, don’t let that fool you. He is an avid supporter of future President Donald Trump and knows the important differences between men and women. Gavin’s been happily married for eleven years now with three children, he would know.

Take a look at this video:

Boy, did Gavin get a lot of flack for that. He’s been called the worst, most sexist man on the planet for saying what he said and a whole lot of horrid things. Though what struck me is that Gavin is anything but sexist, if you think about it. He actually cares about what plenty of women want and wants society to respect those who have a calling to homemaking and motherhood. Gavin knows so many women don’t want to work in the outside workforce, they want to work more at home- for their loved ones, husbands and family. He recognises the fact this feminist agenda from the 60/70s has hurt us so badly throughout the years and wants women to find happiness again in traditional living.

Ladies, let’s give a round of applause for this amazing gentleman!